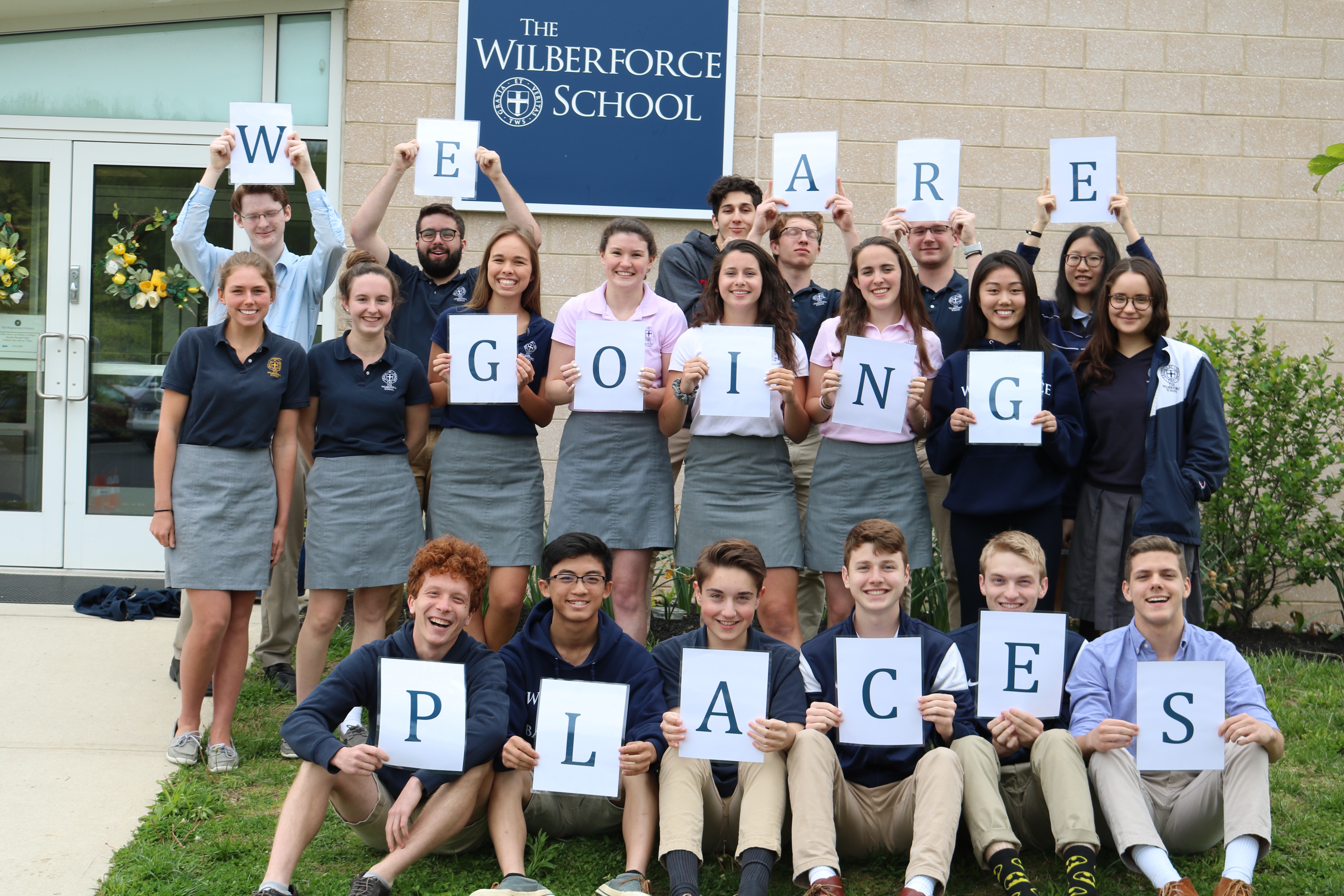 “We had a hamster named Thumbelina Big Foot.”

“Everyday at recess we would be centaurs digging trenches,

beautiful trenches that the girls in the class would later refill.”

“One ‘Character ‘Dress Up Day,’ I was Pippi Longstocking.”

“While taking MS Logic, I spent evenings pointing out my parents’ logical fallacies.”

16,000 hours of recess and phonograms, logic and Latin, HL and MATLab, prayer and consultation—and now the end is in sight. Five current Wilberforce seniors have studied at our school since their Explorer days. This means (among other facts) they have labored in four different venues, watched us grow from a lower Elementary School to a full JK-12 institution, had six different art teachers, watched Fine Arts and Grandfriends Days evolve and split, and played in many different sports. These five—Clara, Ethan, Jack, Julia, and Olivia—agreed to be interviewed, reminisce, and reflect about these many hours, days, and years. The talks we had were deep and engaging, full of funny stories and laughter, both predictable and eye-opening, heart warming and challenging. While these interviews recounted powerful and personal remembrances, they also revealed some recurring motifs. By looking more closely at these, we see that Wilberforce has proved—as our website posits—to be a place where students flourish, are known, and do more.

Not surprisingly some of our students’ most vivid elementary school memories deal with recess. Flag football (and accompanying bruises), wood chips, jump ropes, foursquare, and mud all play prominent roles. Other more academic recollections also surfaced. Math drills and Venn Diagrams (best when accompanied by Skittles), trips to Gettysburg and Spring Lake, moving dividers between classrooms, and (the all time favorite) regular nature walks still bring smiles. One student mentioned that he chose to write his freshman year research paper on Gettysburg because of his Class Four exposure to Little Round Top and Seminary Ridge. Another mentioned her love of observation began walking around 33 River Road, and still inspires her scientific exploration today. All of them mentioned “Fluff-its” in Class Three with Mrs. Cho, a beloved memory of a classroom economy long passed.

With regard to their Middle School years, our seasoned Wilberforce students have even many more memories. Highlights of these years included playing on a variety of sports teams, learning logic and delivering chapel speeches, and, above all, February Focus Week. In particular, students fondly recalled making scary movies in the Gothic buildings of 75 Mapleton. The Seniors all agreed that these Middle School years are important, and, for that reason, they gratefully acknowledged the role of the current House System in enabling them to encourage and influence sixth through eighth graders.

Upper School proved the time when everything came together. Academically, students enjoyed the discussion-based classes (including no-holds-barred debates and arguments), learning to balance questioning of others’ views with careful listening, learning to disagree respectfully, read primary documents, and fearlessly voice contrary opinions. Some students concluded that HL was their favorite part of their Wilberforce years, a place to learn to communicate, to express judgments, and to interact with teacher mentors. Dante, Plato, Hamilton, O’Connor, Twain, and Cather were not merely assignments to complete, but were instead texts that ignited the rethinking of values, questioning of opinions, and changing of priorities.

Upper School science and mathematics courses also provided many growth opportunities. One student conceded that, in another school, she would have avoided upper level math and physics, but now she intended to continue STEM study in college. Several students extolled the value of math help, seeing it as a catalyst for learning how to learn. They also appreciated both the satisfying, “puzzle-solving” nature of math and science study and the balance inherent of not only learning physics theories but also visualizing them in MATlab. One student added that he spent so many hours in math help that he not only came to grasp higher level mathematics but also he grew to see the math help instructor as a beloved coach and mentor.

The five Wilberforce “veterans” also viewed our school’s arts curricula as key to their flourishing. Some of the five saw arts (music, drama, art studio, and dance) as their special skill, while others felt they were “arts-challenged.” Either way, the five joyfully recounted growth as sketchers, painters, singers, art and music historians, and actors. Curricular arts instruction also pointed the way for extra-curricular pursuits. Participating in the school musicals and a cappella groups, taking up new instruments outside of school, experiencing the challenges and fellowship of producing The Subduing of Ranga—all these activities reflected our school’s fourteen-year emphasis on the arts. As the five seniors looked back, they credited extracurriculars with teaching them flexibility, introducing them to new and diverse interests, demonstrating the value of teamwork, and providing opportunities for leadership.

Even while trifecta of humanities, STEM, and arts elicited growth and flourishing and after school complimented the school days, each of the seniors emphasized the role of community in their development and enfolding. When, over the years, they welcomed new students into their classes, the five happily found newcomers commending the friendliness of their peers. A sense of community began early: the five students remembered joining as an entire school to pray each morning in the River Road Church sanctuary.  More recently, both Morning Prayer and the House system have provided opportunities for service, connection, spiritual growth, and leadership.  As well, House leadership offered a foray into student government even as Middle and Upper School students experienced natural connections, fellowship, teamwork, and a lot of laughter. The seniors appreciated the way they have developed as leaders, as they problem solved and innovated, explained and cheered, motivated and served the various houses. They added that having leadership positions in their houses resulted in their taking even more seriously their responsibilities both to live out their faith and to encourage faith in others.

As they reflected about their Wilberforce years, our five veteran TWS students saw how their studies and sports, community activities and co-curriculars enriched their school years. They added that because of caring relationships with teachers, opportunities to working alongside other students and build school culture, easy access to deans and administrators, and an atmosphere of innovation and acceptance, students can do more at Wilberforce.

When asked what advice they would give to younger Wilberforce students, the seniors concurred in their suggestions. Jack encouraged involvement: “Branch out as much as you can—do three sports, sing in the musical, and participate in House leadership. Try new things—learn, experiment, and make friends.” Ethan added: “Take advantage of the level of education, even if you feel pressure. Anyone can be engaged, and do well. Encourage others, and they will be encouraging you.”  Olivia spoke these words of encouragement: “Don’t give in to fear; Wilberforce is not as stressful as you think. The outlook is on the fun of learning not the work of learning, and the teachers really want you to succeed. They look out for you, and remind you that school is not defined by grades.” Clara seconded this perspective, and exhorted:  “Enjoy your teachers. They are interesting people, and they are funny.” To sum up, Julia advised: “Take advantage of the intimacy and close relationships (with both students and teachers) that are possible in a smaller school. Explore—sports and art, math and theater. And, with regard to HL, go for it, and see what you will discover about theology, life, and yourself.”

A place that stretches students and welcomes them, opens new fields and encourages exploration, molds and transforms thinking through interaction with living texts, Wilberforce—according to these five seniors—has lived up to its mission. And, because The Wilberforce School has accomplished its mission, these students eagerly anticipate college experience. They agree that college will bring new challenges and opportunities and that it will offer a new environment to apply skills learned in discussion classes. The students feel ready to use their increased independence to discover higher math, Near Eastern languages, business courses, and the intricacies of managing budgets and laundry. We at Wilberforce commit ourselves to equipping our students to partner with Christ in furthering His Kingdom objectives. It seems we are doing something right.

The Next Chapter in the Christmas Story

As a school community, as families, and within our churches, we are privileged to be the hands and feet of Jesus to those in need throughout our community and world.

Involving your children in the anticipation of Advent

Three easy ways to evoke wonder in your children this Advent season from Dr. Karen Ristuccia.

The Desolate Wilderness: A chronicle of the Pilgrims' arrival at Plymouth, as recorded by Nathaniel Morton.

The Last First Day of School

A Letter from David Rowe, a senior dad.

Our Dean of Instruction, Dr. Karen Ristuccia, reflects on Summer Institute spent with faculty and staff at Wilberforce.